When you're adding people to a rota in ChurchSuite you'll be warned if a clash will occur. There are two types of clash that you might be alerted to:

Some clashes are unavoidable and even acceptable and inevitable. For example, people might serve in the refreshments team before a service but also be part of the set-up team for the service before that. Then they may be leading prayers during the service and then go out and lead a youth group later in the service! All of these overlapping serving instances may give rise to date clashes on the respective rotas.

You can reduce the number of false clashes detected by setting each rota's serving times to more accurately reflect the actual times of serving within each of your services. For example, if your morning service generally runs from 10.30am to 12pm on a Sunday it may be tempting to set all the morning service rotas to run for those times. Instead, we encourage you to set more precise serving times when adding rotas to minimise false clashes. It is also possible to disable date clash detection on certain rotas - see later in this article. Remember, a clash is a warning of something that may need to be remedied - but sometimes clashes cannot be remedied, they remain clashes.

In addition to on-screen clash notifications when adding people to rotas, Users you can view all rota clashes at any time by reference to the Clashes and Unavailability tabs on a rota's "View" page... 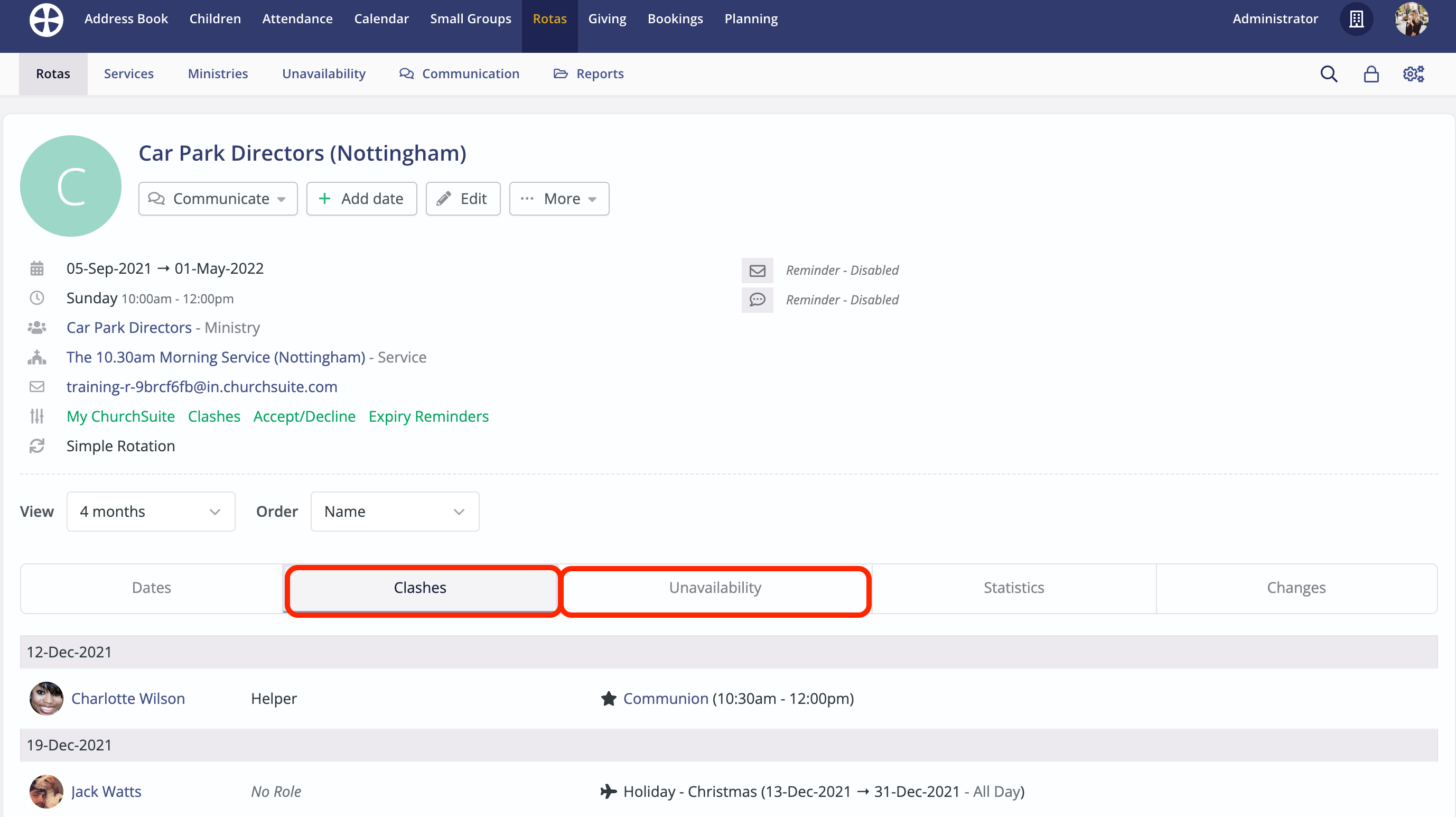 ...and also view all clashes across all rotas using the Clashes report in the Rotas module's Reports section. The rota Clashes report can be filtered by particular Ministries or Tags within a given range of Dates. 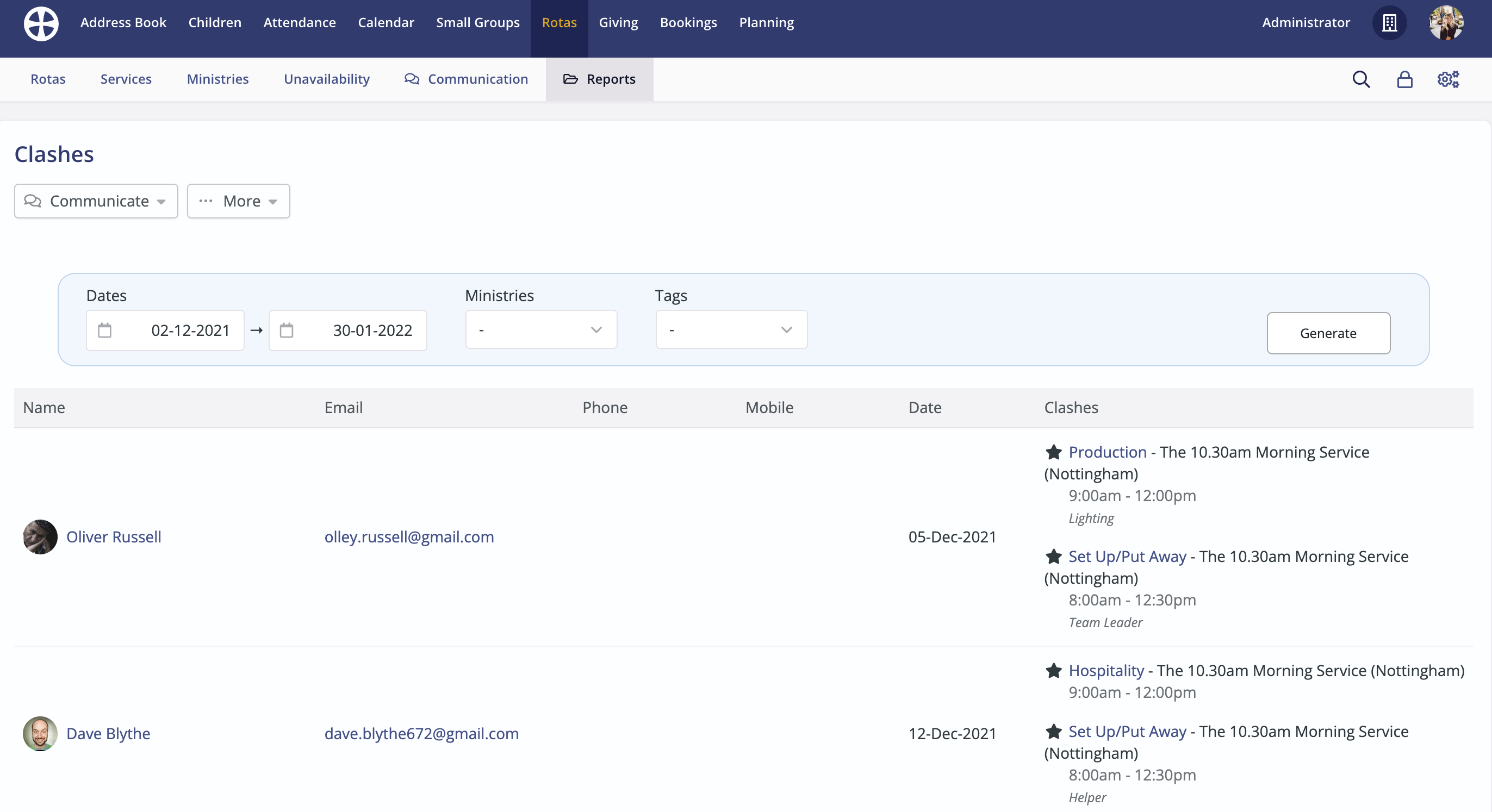 This report is designed to provide everything needed to decide whether any action is required. For example, in conjunction with the Serving Frequency report you may look to identify people at risk of "serving fatigue"; those who are doing too much! Or it might highlight bottlenecks that could be avoided if additional people were recruited to share the load. Helpfully you can see the status of affected rotas (draft/published) and the roles of the affected serving team members. Please remember that this report is intended to be a decision-making tool - the clash detection functionality is not intended to be a mechanism that prevents you from adding people to a rota.

The My Rotas section of My ChurchSuite is great for allowing your serving team members to be able to:

When rota members are recording a rota swap or signing up to dates on a rota, they are prevented from processing the change if it will result in a rota clash for another rota member. In these circumstances the rota swap must be processed by a User in the Rotas module or by the ministry overseer in My ChurchSuite. This is intended functionality to prevent team members causing rota changes that have unhelpful "knock on" effects to other people or ministries. However, rota members are able to process swaps or sign up to rota dates that result in a personal clash - in this scenario a notification is given and we assume they will not create a clash for themselves without having a plan to resolve the clash!

For each rota within the My Rotas section of My ChurchSuite there is a helpful Clashes summary for ministry overseers showing a list of all clashes - including the rota dates within the rota being viewed and the clashes that arise from other rotas. Under 18 rota members are shown with a 'child' icon next to their name in the list. The report also helpfully shows the rota status (if the rota is 'draft', for example) and the roles of team members on those rota clash dates. 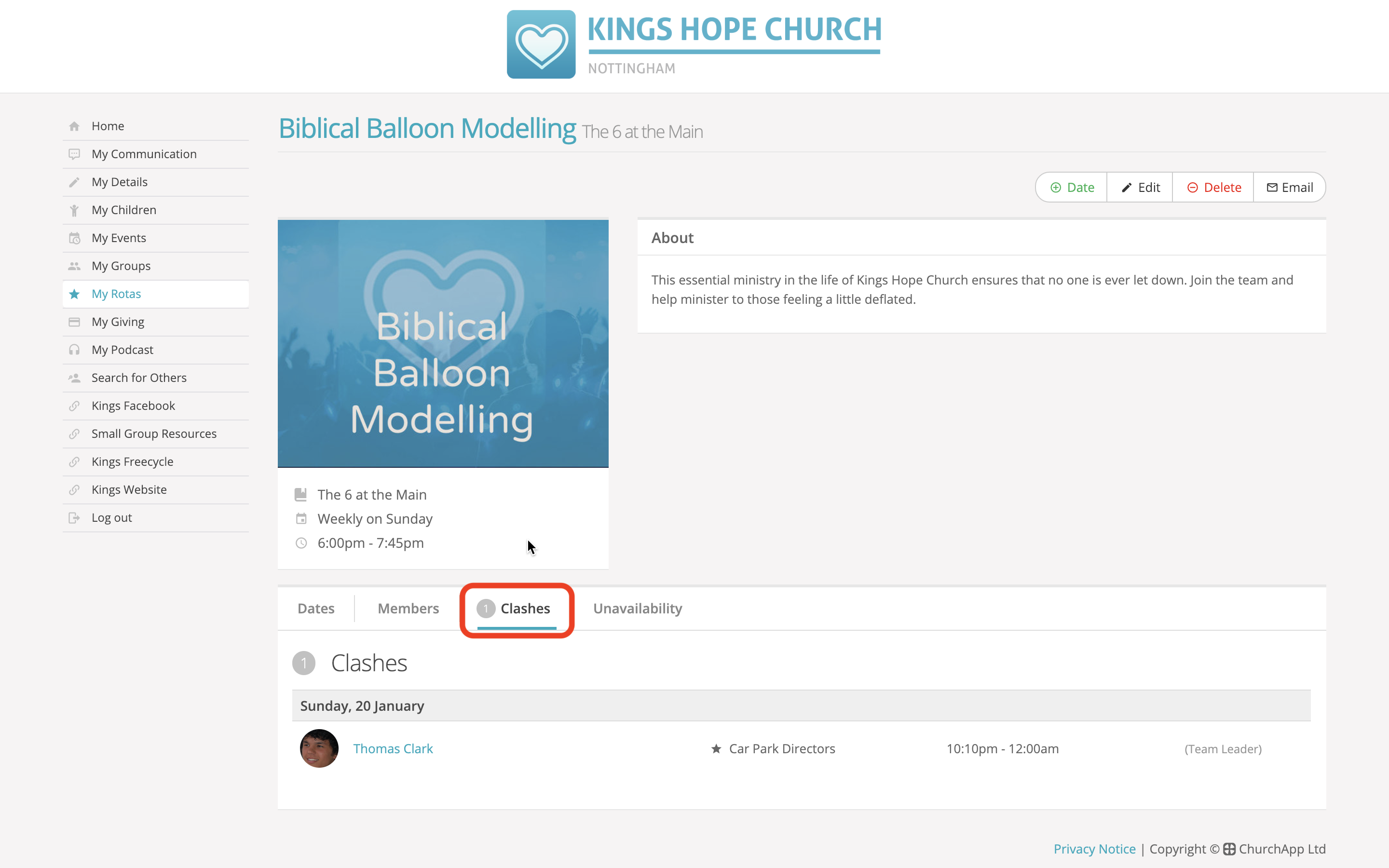 Clicking on a rota member name in the Clashes page will display their contact details so that overseers can easily get in touch with the person to resolve the clash (subject to the privacy settings of each rota member).

It's sometimes the case that you have a rota for which clashes will always arise that are not clashes that you need to be notified of. For example - a 'Communion' rota or 'Readings' rota that serves part way through a service - it's entirely possible for these rota's members to participate in other rotas for the same service and be on the 'Communion' or 'Readings' rotas and for it not to cause a real clash - people can do multiple things in a service!

With this in mind it's possible to disable (or re-enable) clash detection on a rota-by-rota basis - either when the rota is first created or after the rota has been published. This can be done in ChurchSuite, by a User and in My ChurchSuite by ministry overseers. In the example earlier, disabling clash detection for the 'Communion' and 'Readings' rotas will prevent unhelpful false clashes showing on those rotas and any other overlapping rotas. Let's look at how that works for each platform in turn...

When adding a rota there's an option on the Add rota page to enable or disable Clashes for that rota. If clashes are Disabled, the rota will not generate date clashes (normally shown in red) with any other rota serving at the same time. Unavailability clashes, shown in red strikethrough, will of course continue to be shown on all rotas. 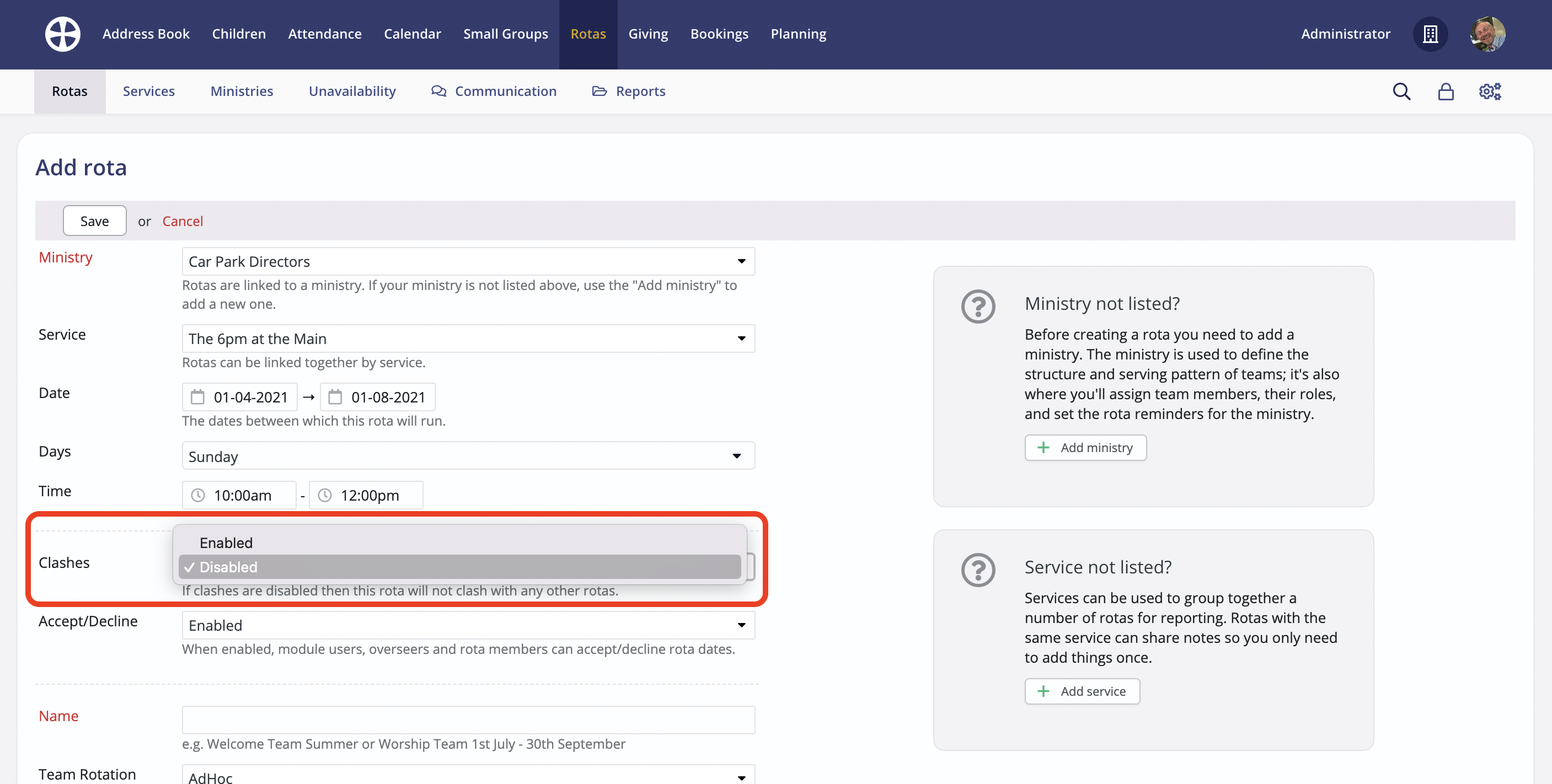 On the Edit rota settings page, set the Clashes to Enabled or Disabled as required. Click Save Changes. 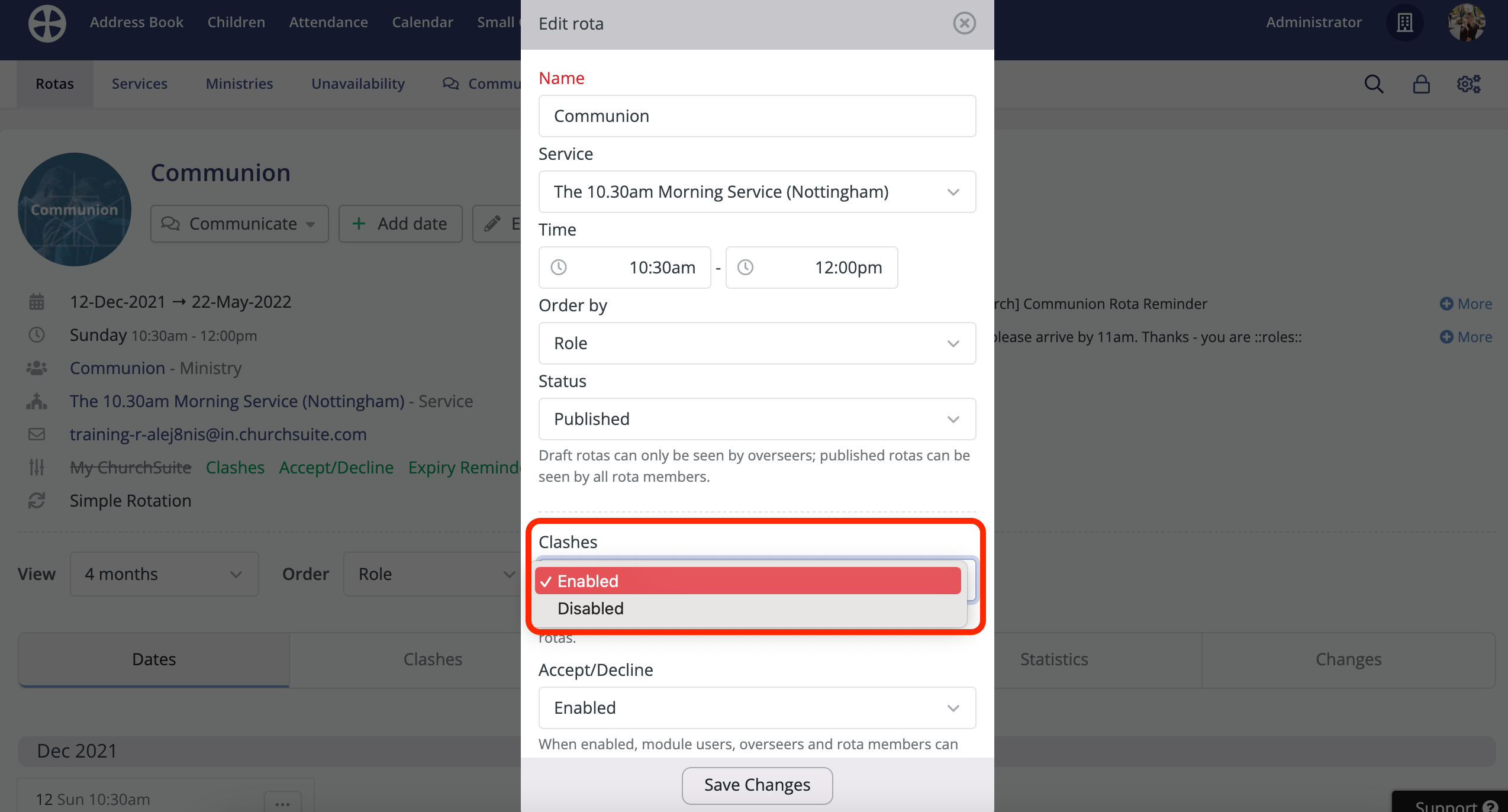 Enabling and disabling rota clash detection in My ChurchSuite

When ministry overseers are adding a rota in the My Rotas section of My ChurchSuite, there's an option to enable or disable Clashes for that rota. If clashes are Disabled, the rota will not generate date clashes (normally shown in red) with any other rota serving at the same time. Unavailability clashes, shown in red strikethrough, will of course continue to be shown on all rotas.

A ministry overseer can also change a rota's Clashes status at any time by editing the rota. Click the Edit [rota] button at the top of the rota page.

On the Edit rota settings page, set the Clashes to Enabled or Disabled as required. Click Save Changes. 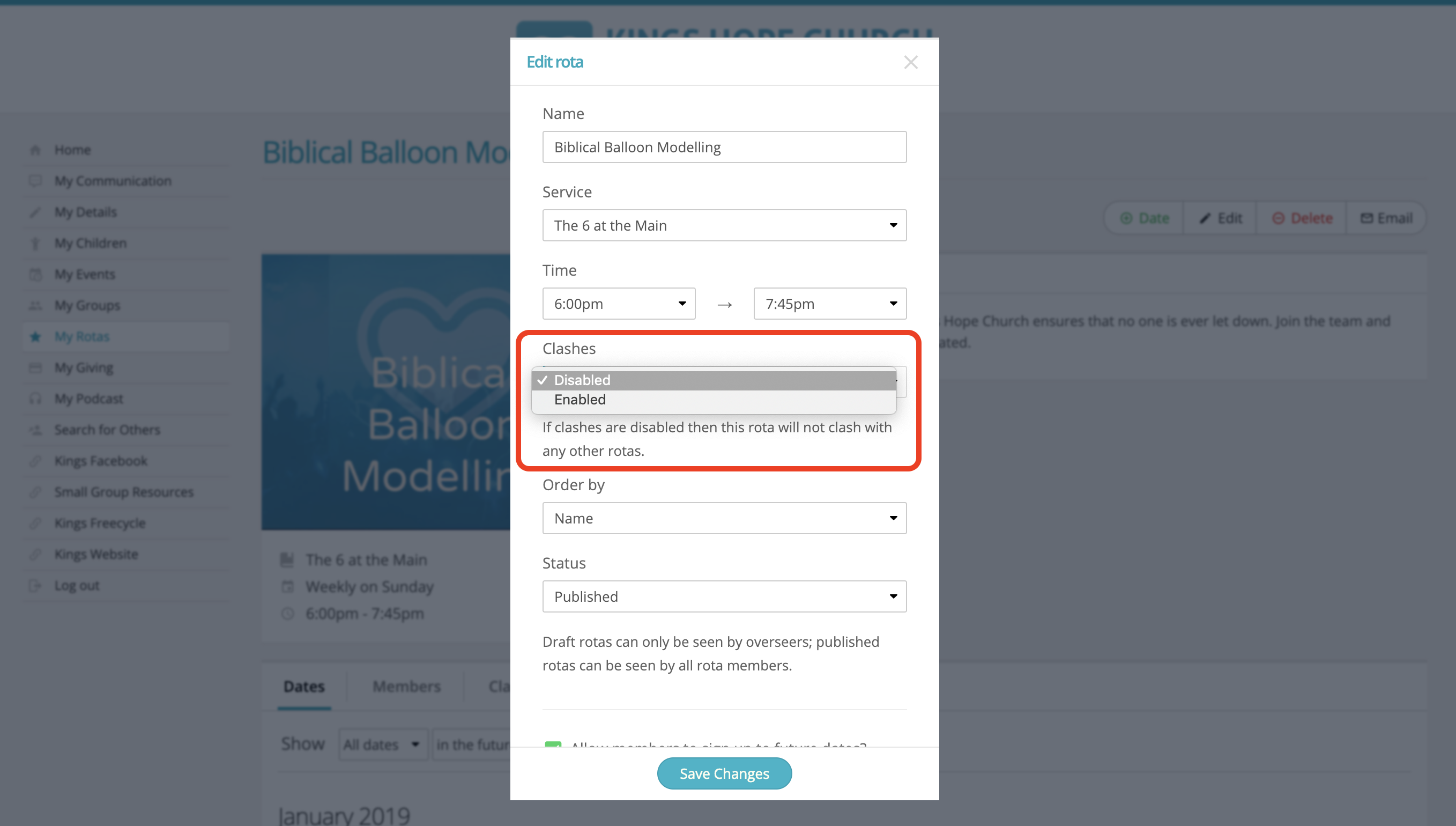