It's sometimes the case that you need to restrict the visibility of content of certain features in ChurchSuite, so that information added is private and only visible to certain 'groups' of users - what we call User Groups - and not visible to other users who are not members of the User Group. It's possible to restrict the visibility of Notes, Tags, Key Dates, Forms, Flows, Leave Setup, Preset emails and SMSs, along with Resources in the Bookings module.

For each of the above features, you can set the visibility - either to All Users (i.e. all ChurchSuite users, not all members), Just me (private to the creator/author) or to one or more User Groups. 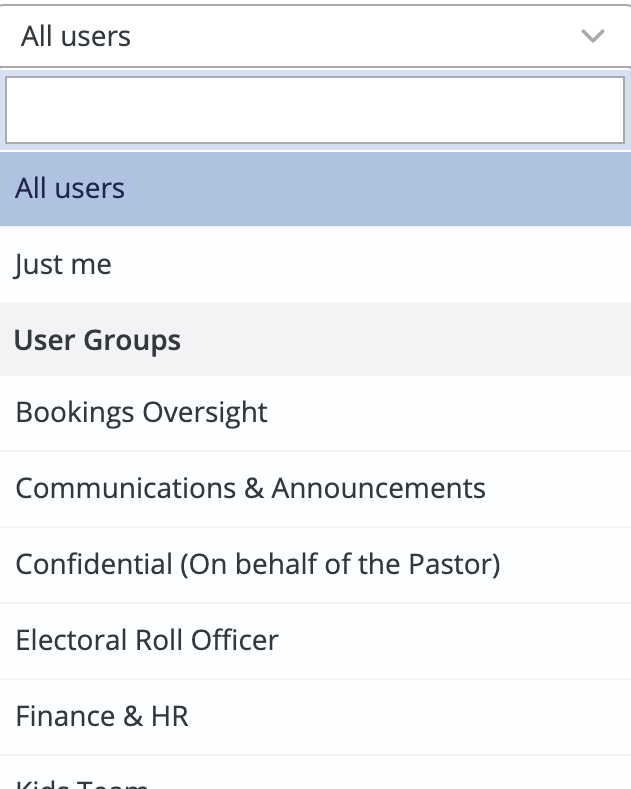 In the Administrator section, click on the Groups menu. Here you can manage existing User Groups - to View, Edit or Delete an existing group. Click to Add group...

Now, working within the User Group's "View" page click Add to group to add one or more users to the group. From here you can also Edit the group, perhaps to change the group's name, visibility or shared email details or use the action menu to Remove a user who is no longer part of that group.

You can return to a User Group page at any time to Add or Remove users to the group.

Now, when adding or editing any of the features listed above, such as a Note, the user can select to restrict the note's visibility to a user group. Only user groups that do not have visibility restricted and user groups the user belongs to will be visible in the drop-down list.

Before deleting a User or User Group, consider whether any notes, tags, key dates, flows, booking resources, leave setup or presets have their visibility restricted to just that User Group. If you proceed with deleting a User or User Group, no users or administrators will be able to view those notes, tags, flows etc - they will be hidden from view. This is intentional to respect the original visibility restrictions that were intended to ensure the privacy of those items.