The Forms functionality explained in this support article is available to all customers as a beta access feature. We will continue to add further Forms features in the coming months, including:

Once a Form has been created, you can promote it to potential recipients by emailing invitations to contacts and children within ChurchSuite or by advertising the public URL (for a Public form only). When sending invitations, a link in the invitation email enables recipients to access the form. If Smart Links have been used, the form will be pre-filled with existing data such as their name and contact details.

Invitations can be used for all types of forms:

Smart links elevate a Standard field. When used, they pre-fill data in forms sent using Send invite and populate data when creating a new contact using Add contact. Fields without smart links create isolated data which can only be used within the form context and have no direct link to any database data for the respondent.

These forms would behave in the following ways in relation to Send invite:

At any time, the fields on Form 1 could be edited and smart links could be added. In this scenario Form 1 would then behave exactly like Form 2.

In the same way, the fields on Form 2 could be edited at any time to remove the smart links. This would stop the data being pre-filled for invitees who have not previously responded.

To send an invitation, select Send invite at the top of a form's "View" page. This action is only available for a Published form.

You can then compose your invitation email. It's important that the link provided is always present in the invitation email as it is the unique link to a pre-filled form for each recipient. You can add text above and below the link. 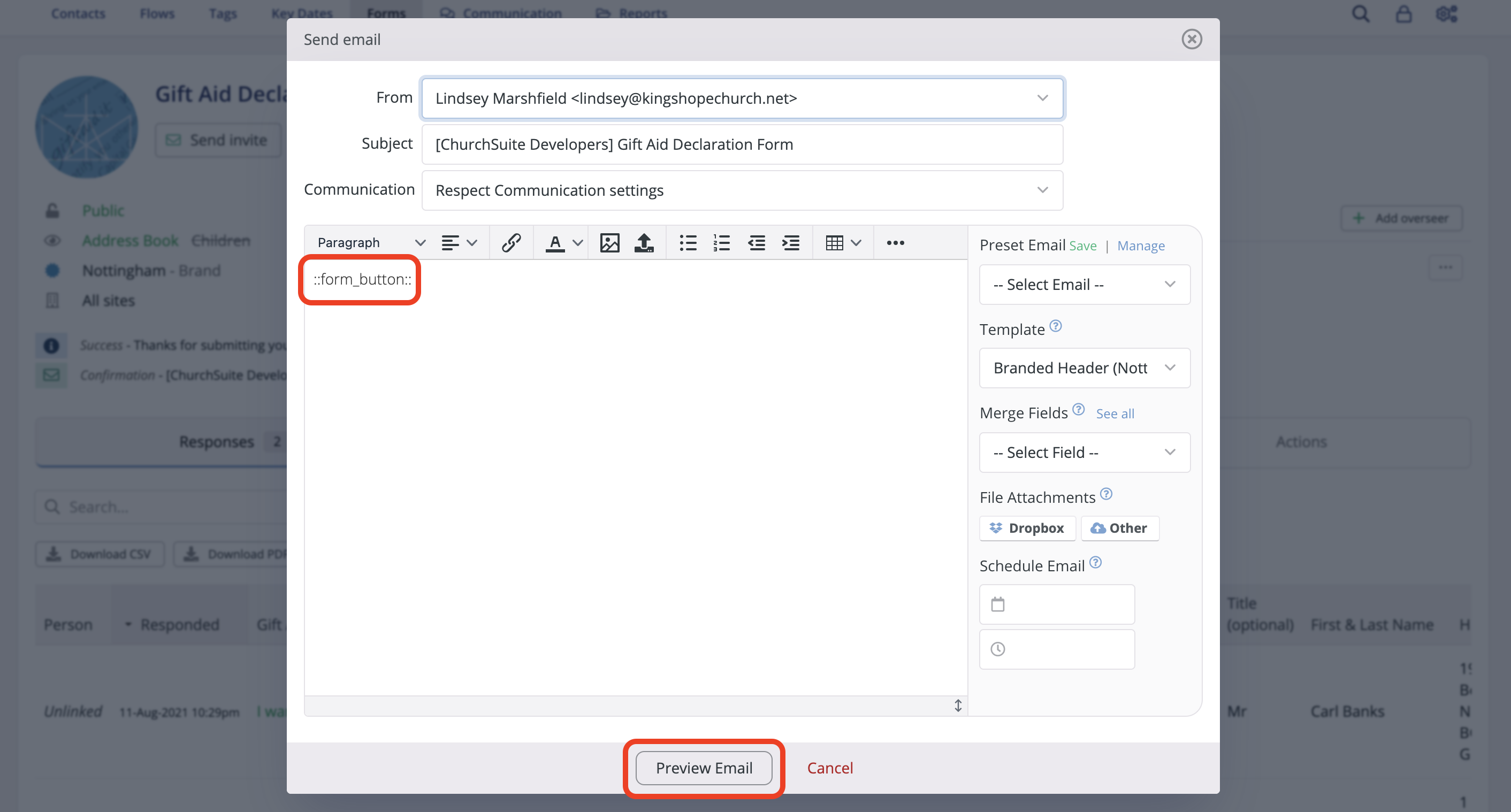 When you have finished composing your email, select Preview Email to preview the content and format before selecting recipients.

Consider the following scenarios before deciding when to link responses and send invitations:

Linking responses BEFORE sending invitations:
Before sending invitations, you release the public URL link to a form and receive an influx of Unlinked responses. As the form has First Name and Last Name on it, within ChurchSuite you're able to link the responses to individuals. When you subsequently send the invitation to everyone in your Address Book, the invitation will not go to Linked people because a response for them already exists for this form. The invitation will be created but the status will show as Responded and no email will be sent to the invitee.

As the form has First Name and Last Name on it, within ChurchSuite you're able to subsequently link the responses to individuals. After doing this, ChurchSuite will show the invitation as Responded because it checks for existing invitations during the linking process. When a person visits the invitation link within the email, they will be directed to their previous submission and can edit this if desired. This stops multiple submissions being created for an individual.

Once invitations have been sent, clicking on the Invites tab will show a table of invitees. The table details the Person who was invited, the Sent at date/time and a Status of Not Responded or Responded (unless the form is anonymous in which case there is no Status column).

A progress bar shows how many forms have been completed by invitees.

A filter enables you to view a particular response status eg Responded/Not Responded...

...and a search box allows you to search for a named invitee.

For Not Responded invitations, an Action menu provides an option to Resend invite...

...and a batch action checkbox enables you to resend invitations to one or more invitees.

Responses are shown on the Responses tab.