The Forms functionality explained in this support article is available to all customers as a beta access feature. We will continue to add further Forms features in the coming months, including:

Form responses are created when a form has been successfully submitted by clicking the Submit button at the end of a form. Within ChurchSuite, responses can be linked to existing contacts or children and they can also be used to create new contacts or children. When Smart links are used, form responses can be used to edit an existing person's record. With the ability to update a person's existing data, forms can be used for a wide range of purposes, whether you want to update contact details, communication preferences or custom fields.

Selecting the Responses tab shows a table with a row for each response. The table has a Search box for filtering by Person name and an Advanced Search with a filter for every field on the form. All responses can be downloaded using the Download CSV or Download PDF button.

For Public and Private (non-anonymous) forms there is a Person column, a Responded column showing the date and time of the response and columns for each of the fields on the form. Submissions from a Public form URL are shown as Unlinked to any person within ChurchSuite. It is up to the ChurchSuite user to link them to an existing contact or child or to add them as a new person within ChurchSuite if appropriate.

At the right hand side of each response is an Action menu. The actions which are shown change depending on a range of factors such as whether or not the respondent has been linked to an existing contact or child.

If your form only has a few questions, the Action menu can be accessed by clicking the dots at the far right of the screen.

If your form has a lot of questions, you can access the Action menu options either by scrolling to the far right of the response or by hovering over the response - so that the response turns blue - and clicking.

This will open a View of the response from which the Action menu options can be accessed.

The Action menu options are:

Edit response - launches the respondent's form page, showing their response data in Edit mode. The response  can be edited and then saved and an information message shows which ChurchSuite username will be shown when selecting View changes. There is a Resend confirmation checkbox (ticked by default). When ticked, an email confirming the changes will be sent to the respondent after Save has been pressed. If a data protection checkbox field is present on the form, it will not be shown in this context. 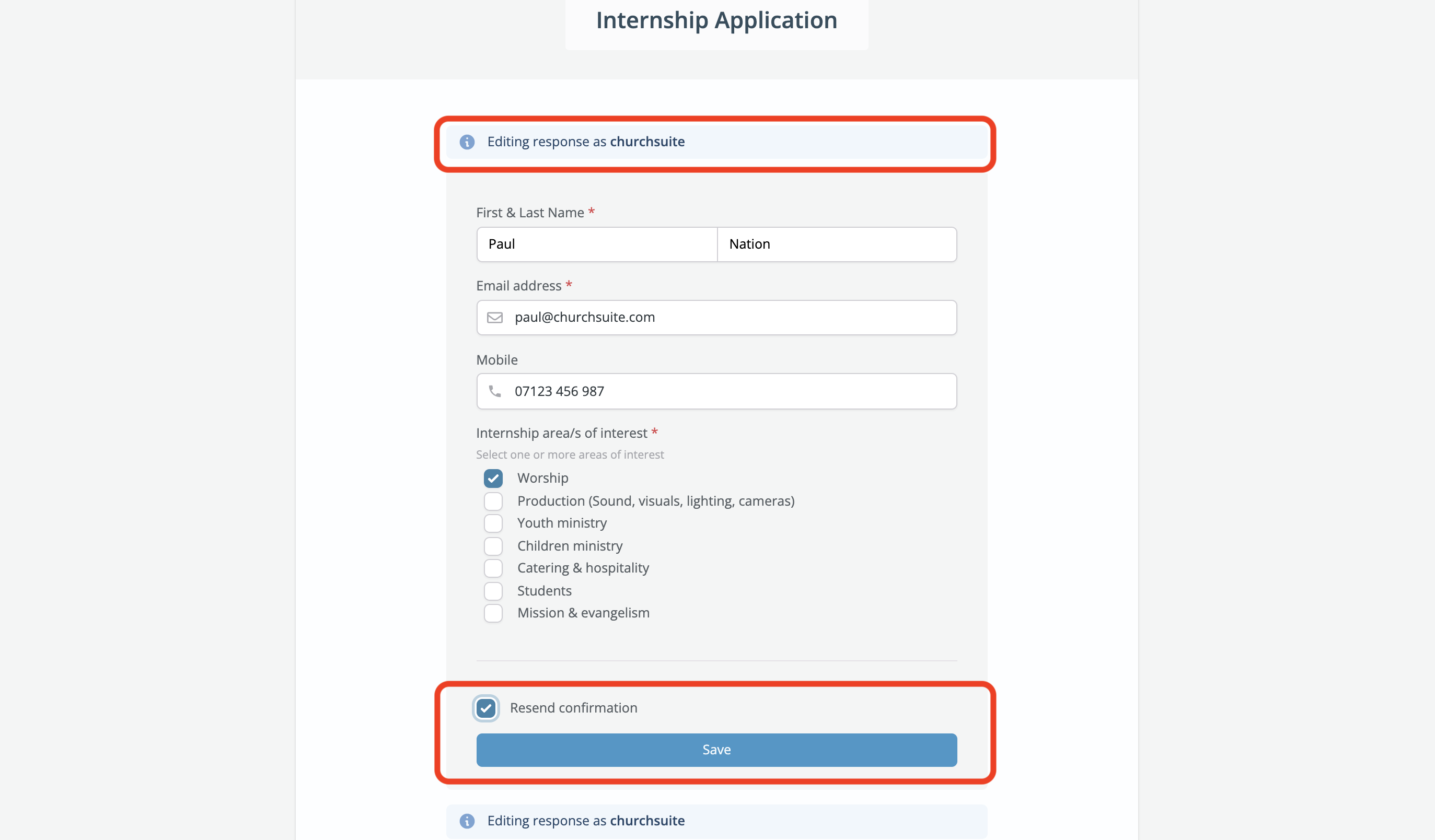 Resend confirmation - enables you to resend a confirmation email to a respondent, confirming their responses.

Run actions - enables you to manually trigger a range of actions such as adding respondents to a Flow, Ministry or Small Group; sending them a Preset Email or SMS; assigning them a Key Date or Note; and Archiving or Deleting them.

View - enables you to view an individual's response. The options shown in the Action menu can also be actioned from the View page as described above.

Add contact - launches a pop up which is pre-populated for adding a contact to the Address Book module. Only smart linked fields from the form will be populated. Any fields without smart links will be ignored. Note that the option to Add contact is only shown for Unlinked respondents who have completed a form which is visible in the Address Book. 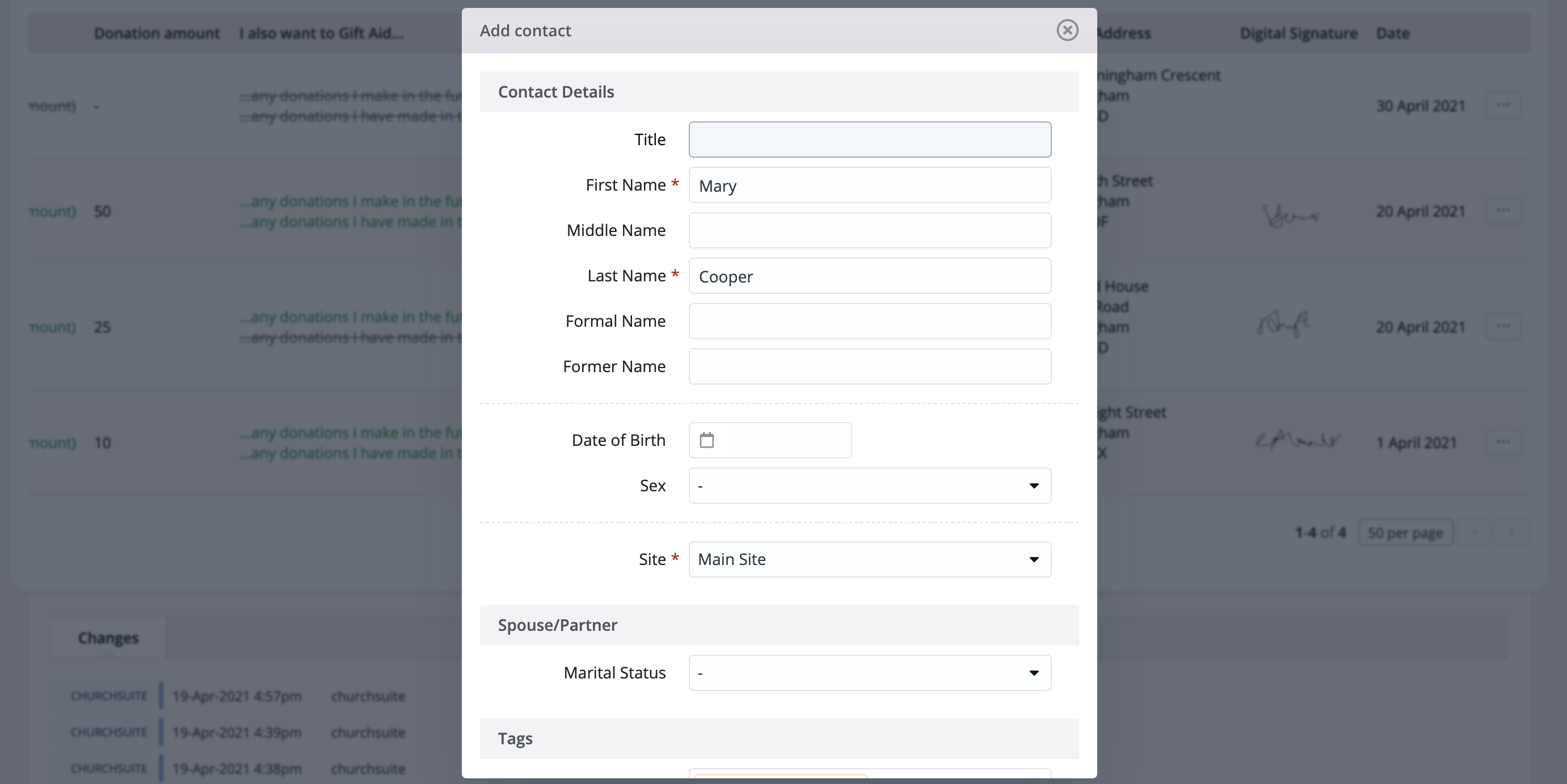 Add child - launches a pop up which is pre-populated for adding a child to the Children module. Only smart linked fields from the form will be populated. Any fields without smart links will be ignored. Note that the option to Add child is only shown for Unlinked respondents who have completed a form which is visible in the Children module.

Link to person / Edit person link - launches a pop up which enables you to link the response to an existing contact or child. The same pop up can also be launched by clicking on the word Unlinked in the Person column. Note that Edit person link only shows for responses which are not linked to an invitation.

In order to help you link publicly submitted form responses to existing people within your database, ChurchSuite detects and suggests the best matches to make this process quick and easy. After examining the data in the form response, potential matches will be suggested. ChurchSuite will suggest Contacts if the form is only visible in the Address Book and Children if the form is only visible in the Children module. Both Contacts and Children will be suggested if the form is visible in both modules. Linking does not happen automatically. Click on any of the potential matches to link the person to the response. 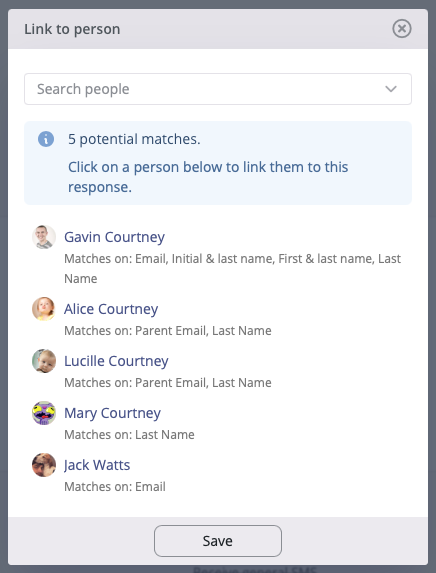 When there is valid data in the form response but no matches can be found, the pop-up will show that ChurchSuite was unable to match the response with anyone in the database. 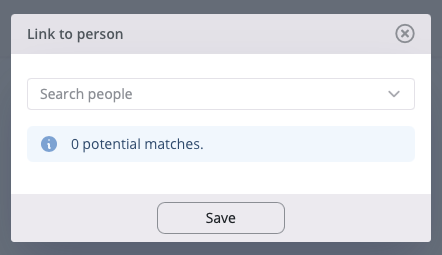 When there is not enough linked data in the submitted response to find potential matches, a pop-up message explains this. In this scenario, you may want to consider setting more fields as Required or perhaps Smart linking more fields if linking is important. 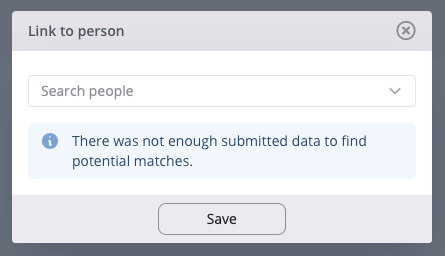 In both of these scenarios, you can use the Search box and make your own selection in order to link the response to a Contact or Child.

If an attempt is made to link a response to a contact or child who is already linked to a response, an error message will appear.

A response can be unlinked from a Person or Contact by clicking the cross at the right of the contact's name. Once this has cleared the Person field, click Save.

View changes - launches a pop up which details any changes which have been made to the initial response. View changes only shows when a respondent has edited their response after their initial form submission.

Edit person - enables you to update a person's record in ChurchSuite with their form responses as described below.

When a response has been linked to a contact or child (either manually or because invitations were used) a Forms section shows at the right hand side of the person's record.

This shows recent form activity and whether or not the person has responded to the forms. The most recent form is listed first and the date shown is either the invitation date or the date on which the form was submitted. The Status of the person's response is also shown. Clicking on the name of a form in this list takes you to the form's "View" page in the Address Book or to the "View" page in the Children module if the form is not visible in the Address Book.

When Smart links are used in a form, it’s possible to update a person’s record within ChurchSuite, using their responses. For example, if a respondent who is already in ChurchSuite provides an updated address and mobile number on their form, it’s easy to compare their form response with the existing database information, see differences and selectively choose which data you want to update.

This functionality is only relevant for forms containing fields with Smart links. Editing is only possible for form responses which are linked to a contact in the Address Book or a child in Children module.

On the Responses table, the Action Menu for rows which include a highlighted cell will show an Edit person action.

When selected, a pop-up will detail the differences listed, showing the database data on the left and the form response data on the right. By default, the database data is selected, meaning that any changes need to be opted into by the User. As well as being able to select edits one at a time, options at the top of the modal enable you to easily select all edits or no edits. After selecting how you'd like to edit the person, click Save.